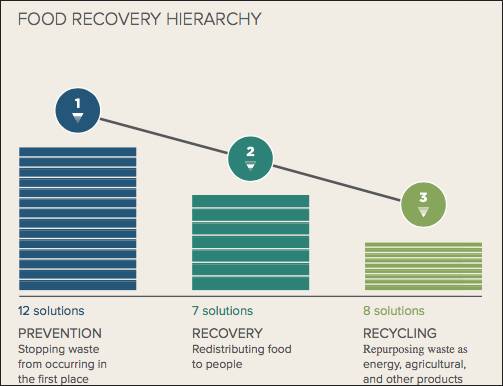 If you want to get really nerdy about food waste (and I love being nerdy about food waste!) here’s a delightfully interactive web site where you can lose yourself for hours: [Note: This link has been removed from their website.] Its creator is the collaborative effort of more than 30 nonprofit, business, foundation, and government leaders, and they have created “Roadmap to Reduce U.S. Food Waste.” This fascinating study comes at food waste from several angles, addressing its environmental as well as economic costs.

The report begins: “The country spends $218 billion a year, or 1.3% of GDP, growing, processing, and transporting food that is never eaten. That adds up to 52.4 million tons of food sent to landfills annually. Add to that another 10.1 million tons estimated to be discarded or left unharvested on farms and in packinghouses, and you have a 63-million-ton mountain of wasted calories, resources, and energy. This mountain of waste grows up to two times if you add in other food for people that ends up being composted, converted into animal feed, or discarded in other ways, leading to up to 40% of all food grown being wasted.”

The Obama administration has set a goal to reduce food waste by 50% by 2030 and ReFed tackles the issue with a three-prong approach. The first, prevention, involves keeping food from going to waste. Approaches include consumer education (saving more than 584,000 tons of food and 281 billion gallons of water,) more consistent package labeling and dating (diverting 398,000 tons of food from landfills,) and improved packaging to prevent spoilage and transit damage.

The second level, recovery, is where groups such as Society of St. Andrew come in. The group found, for instance, that with expanded donation tax incentives (North Carolina removed all gleaning tax credits from the tax code in 2014), more than 638 million meals could be recovered each year. And the happy byproduct of saving that food is the reduction of 874,000 tons of greenhouse gases annually!

Donation matching software, including technology platforms to connect food donors to recipients easily and efficiently, could save up to 250 million meals per year, and reduce greenhouse gases by 555,000 tons. And something as basic as donation liability education (basically letting grocers and producers know that they can donate food without fear of law suits) could save an additional 95 million meals a year.

The final piece in the food waste puzzle involves keeping food out of landfills through recycling efforts including various levels of composting and as well as producing animal feed. These are the foods that remain once the first two approaches are implemented. The hope is that the amount that needs to be composted and recycled would become smaller each year.

The emphasis of the report is that all stakeholders have to work together. With increased government incentives, producers at all levels will be more inclined to work with groups such as SoSA. With better education, less food will be considered “bad” or inedible.

It’s encouraging that so many stakeholders from such a diverse group of interests are on board, seeing what we have seen for so long: In a world with hungry people and limited resources, no food should go to waste!