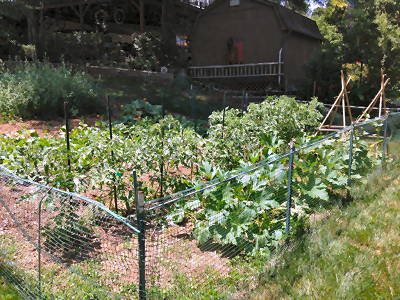 Sometimes the sadness in the world gets to be too much for me. This has been one of those weeks, as we as a nation try to sort out the events in Orlando that left 49 of our brothers and sisters dead and more than 50 physically injured. I say physically, because the emotional and spiritual injuries on their families and friends — and on those of us who grieve the senseless loss of life anywhere — are real and long-lasting as well.

In the midst of that grief, a few pictures showed up in my inbox. I’d bumped into a friend over the weekend. We chatted at the grocery and she mentioned that her mother’s garden was doing really well in the June heat. I asked who tended it, and she said, “Oh, Mother does. She always has. I’ll send you some pictures next time I’m out.”

Her mother is my friend Evelyn, a smart and gracious lady who I’ve known at my church for nearly thirty years. Evelyn is one of those women who I always like spending time with – full of life and compassion, always willing to listen if I have a problem. Not shy about sharing her own stories.

What’s truly amazing about Evelyn’s garden, the one she tends herself, is that Evelyn will turn 100 years old in July! I hope she won’t mind me telling folks that. Her daughter tells me that Evelyn was one of nine children raised on a farm in Union County, NC. She’s gardened her whole life and can still garden rings around her kids.

If you look up what was going on in the world in 1916, the year Evelyn was born, it’s a pretty stark reminder that the world has been a harsh place for a long time: World War I raged in Europe; in the Battle of Verdun alone, nearly 300,000 were killed and more than 400,000 were wounded. In Ireland, British troops put down the Easter Rebellion, and lives were lost in bombings and raids and attacks for decades to follow.

But that year and for years after, Evelyn’s family still raised their children and planted their fields and their gardens. They fed themselves and, I’m guessing, shared any abundance with their neighbors.

I thought about that as the country mourns yet another shooting. On Monday morning my phone still rang. A farmer called with 1,000 pounds of yellow squash to donate. Another called with 2,700 pounds of zucchini. 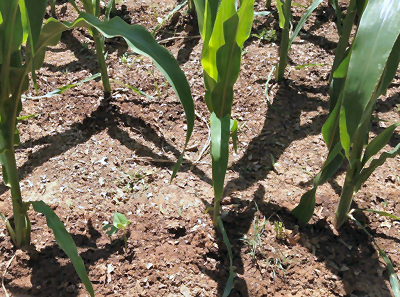 Beans planted in corn row will climb the stalks for support in Evelyn’s garden.

Someone was grading out the last of 2015’s sweet potatoes and wondered if I could send someone to pick up about 750 pounds. When I called a volunteer driver, he eagerly said, “What do you have for me, Jean?” A woman offered to drive a 60-mile round trip route to get produce to recent refugees.

In a week tinged with sadness, it gives me hope that people like Evelyn continue to plant and nurture, that farmers continue to feed us and share with us, and that volunteers are eager and willing to disrupt their lives so that others’ lives might be better. I’m glad I work for an agency that inspires optimism in our communities and feeds those who, for whatever reason, might go to bed hungry in all sorts of ways.