A Talent for Feeding the Hungry 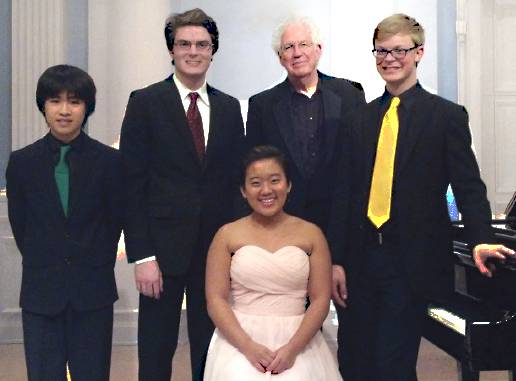 Anyone can find some way to help SoSA feed the hungry. But very few can do so by playing The Complete Keyboard Partitas of Johann Sebastian Bach! This most-creative approach was taken on last November by long-time supporter, Dr. Craig Nies, when he presented two benefit concerts, performed by some of his students at Vanderbilt University’s Blair School of Music.

In the photo, students who played in the concerts pose with their teacher. Left-to-right: Kazuki Takizawa, Thomas Ridgway, June Kim, Craig Nies, and William Woodard. Ridgway is a designated “Young Steinway Artist.” Not shown are Zachary Kleiman and David Rodgers.

Nies has personally contributed to SoSA for many years. He also likes to tell others about SoSA’s hunger ministry, and to send SoSA’s alternative Christmas cards to friends and students. Last year, he realized he had a way to involve his talents, and those of his students, to both raise money for SoSA, and to let more people know about efforts to feed the hungry.

Nies arranged a piano concert on November 7 at Steinway’s Alabama Piano Gallery in Birmingham, and another on November 15 at the Steinway Piano Gallery in Nashville. The audience, hungry for outstanding classical piano, also learned more about the Society of St. Andrew, and their concert donations supported SoSA’s Tennessee Regional Office.

“I wanted to help those in my own community and in Tennessee,” Nies said, “While there are many charities that provide food for the poor, I wanted one that is faith-based. SoSA is highly rated by Charity Navigator, one resource I have always used.”

Nies has been on the faculty of the Blair School since 1991, having previously taught at the Yale School of Music. While at Yale, he performed the complete solo works of Debussy, broadcast by National Public Radio. His performances have also been heard in Russia, England, and Germany.

Linda Tozer, SoSA’s Tennessee regional director said, “We were truly blessed and grateful to Dr. Nies and his students for presenting such wonderful programs that enriched our lives and assisted our efforts in telling the SoSA story.” Nies said, “Anything I can do to promote SoSA and help even in a small way is worthwhile.”

By searching for “Craig Nies” on YouTube, you can view many of his performances.