Ag Day on the Hill

For 15 years, Tennessee state legislators have celebrated “Ag Day on the Hill” – a day to shuck corn, visit farm animals, and celebrate all things agricultural. This year, the day included bagging and distributing 19,000 pounds of sweet potatoes to Nashville area churches and food kitchens, and to food pantries across a 12-county area of Middle Tennessee. 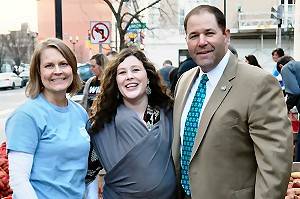 State Senator Andy Holt, vice-chair of the Tennessee Agriculture and Natural Resources Committee, has chaired the annual event for the past five years. Married to Ellie Holt (Society of Saint Andrew gleaning coordinator for West Tennessee) it seemed logical for Andy to invite SoSA to sponsor a potato drop as a part of Ag Day.

Linda Tozer, regional director for SoSA in Tennessee, contacted Mack Rogers, a third generation farmer in Lincoln County who has donated many times to SoSA.

Mack Rogers, with his wife, Jena, and sons, Elijah and Knox. – Photo by Linda Tozer

Early the morning of March 24, Mac, wife Jena, and sons, Elijah and Knox, arrived in Nashville, at a site near the state capitol with 19,000 pounds of sweet potatoes. Noting the five-acre farm first owned by his grandfather, Mack said, “The Lord blessed us and we just keep the blessings flowing.”

Andy said he and Ellie first became acquainted with the Society of Saint Andrew when he wanted to harvest pumpkins he was afraid might rot in his West Tennessee farm. “I hate to see any food go to waste,” he said. It wasn’t long before Ellie moved from being a donor of farm products to being a staff member of SoSA, who helps coordinate the gleaning, delivery, and bagging of excess food from other farmers to feed the hungry in West Tennessee.

* Rich Peck is editor of UMMen, the magazine of United Methodist Men