By Gwen Sisson in the  September 9, 2016 edition of The Starkville District Newsletter *

It was a hot August day in the Mississippi Delta, but for Eve Priester of St. James United Methodist Church of Columbus, gleaning watermelons meant many hungry children in Columbus would have a special treat that day.

“Gleaning is one of the best ways to stop hunger,” Priester said. “If you have the heart, the passion and the desire to do something outside of the box for your community, this is a special project. It is about having a passion to help hungry neighbors in my community. It was a hard job, but it was so worth it.” 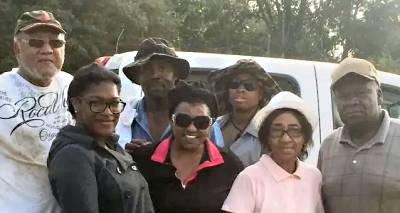 Members of St. James UMC of Columbus, Asbury UMC of Holly Springs, and Wesley Memorial UMC of Greenwood recently gleaned watermelons from the Delta that were divided and brought back to their individual communities.

Priester joined members of St. James UMC of Columbus, as well as members of Asbury UMC of Holly Springs and Wesley Memorial UMC of Greenwood to glean watermelons that were divided and brought back to their individual communities.

Rev. Brenda McCaskill of Wesley Memorial UMC in Greenwood (formerly of St. James UMC in Columbus) said it took some effort to bend down, pull the watermelons, carry them, and to load them, but three teams from the Greenwood, Senatobia, and Starkville UMC Districts worked together in unity to fill up three trucks and a trailer.

“It felt great to give something to people and to witness the appreciation on their faces,” said McCaskill. “Many people thought we were selling watermelons, but when they found out they were free, they gladly accepted a melon.”

Watermelons were distributed at Columbus St. James UMC in Columbus by Terry and Eve Priester; at Asbury UMC in Holly Springs by Rev. Fred and Emma Brown; and at Greenwood Wesley Memorial UMC by Rev Brenda McCaskill and her sister-in-law, Monica McCaskill.

The churches are volunteers with The Society of St. Andrew of Mississippi, which organized the watermelon gleaning project in the Delta. 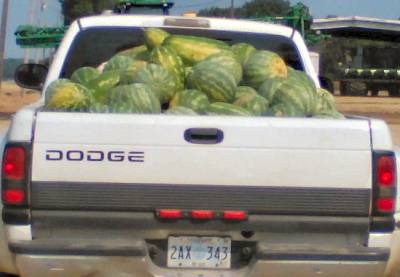 Several truckloads of watermelons gleaned from the Delta headed to Columbus to be distributed by St. James UMC to neighbors in need.

Andy Lemmon, the Mississippi-Arkansas director of The Society of St. Andrew, said over 100,000 pounds of watermelons were gleaned in the Delta by the three churches. Lemmon said produce typically gleaned has cosmetic defects that will not allow the food to be sold by the farmer, but they are just as fresh and tasty as the produce picked for market.

“It is a blessing when farmers allow us to glean food that could not be sold at market, but still good to eat,” Lemmon said. “It is a cost-effective way to provide fresh fruit and vegetables for those families who are living in poverty in Mississippi. It makes a significant impact on hunger in Mississippi.”

The Society of St. Andrew is a nation-wide, faith-based nonprofit organization that connects farmers and volunteers to deliver fresh food to people in need.

To volunteer and receive updates on year-round gleaning opportunities in Mississippi, contact Lemmon at 769-233-0887 and find them on Facebook.

* Gwen Sisson is District Communicator for the Starkville District of the Mississippi Conference of The United Methodist Church.