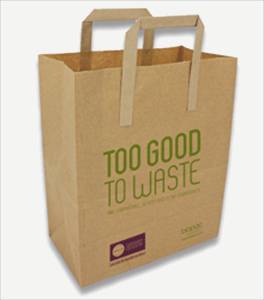 If you’re in France any time soon, remember to ask for a doggy bag! As of January 1, 2016, a new law requires restaurants serving more than 180 meals per day to offer doggy bags to diners who ask. This isn’t an easy fit in a country where currently only 1% of diners request or use a doggy bag. But this is France after all, and in order to increase participation, some restaurants have gone beyond what is required of them, wooing diners with designer containers renamed “le gourmet bag” to help boost the image.

As far as doggy bags go, we do a bit better in the U.S. It’s estimated that while we leave 17% of restaurant meals uneaten (due to large portions or unwanted additions such as the bread basket,) we do take about half of that home. Of course, much of that goes uneaten once it arrives at our houses.

Other changes in France are on the way as part of their commitment to cut food waste by 50% by 2025. Early in 2016, French supermarkets will no longer be allowed to render food inedible past its sell-by date. In the past, to prevent foraging, supermarkets would douse dumpsters with bleach. Soon, food that remains edible will be re-directed to humanitarian causes; other food is composted for agricultural uses, or used as fuel.

In the U.S., saving food from grocery stores isn’t mandatory. The Bill Emerson Food Act, passed in 1996, protects grocers and distributers from liability when donating to a non-profit organization. Many stores, however, remain worried about litigation or bad publicity if someone should become ill from donated food. So food continues to get tossed.

We all have a long way to go. The food system both here and in Europe promotes food waste at all levels: farms, commercial institutions, and homes. From an over-emphasis on aesthetics, to too-large portions in restaurants, to confusing and unregulated sell-by and use-by dates on packaged products, literally tons of good food gets pitched every minute. Only a fraction is composted, leaving the rest to be dumped in landfills, where it emits dangerous methane gas as it decomposes.

You don’t have to go to France and ask for a doggy bag to make a difference. In 2016, resolve to make small changes right here, right now. Go to a farmers market or farmstand and buy produce that’s less than perfect, but perfectly good. Be conscious of what you order and what you leave in restaurants, and make an effort to bring home – and eat – the last portions of your meals. Share an entrée, or encourage restaurants to serve smaller portions. Plan your grocery shopping to avoid over-buying. Once a week, plan a meal around what’s left in your refrigerator. Ask your grocery stores if they donate edible food to local food pantries and if they don’t, encourage them to do so.

And support non-profits such as Society of St. Andrew. According to a study by the National Resources Defense Council, only 10% of potentially wasted food is currently recovered. SoSA, and agencies like us, work hard to bring nutritious food to those who need it, but there is still, obviously, much work to be done! Please join us!