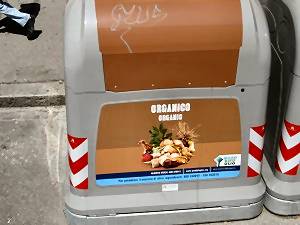 What would it take to make us more aware of the food we throw out each week? Recently I read that we as consumers are price-sensitive at the market, making choices based on a nickel here or a dime there. But then, we’re perfectly willing to toss an entire head of lettuce or box of strawberries that we let molder in the crisper a bit too long. For some of us, it goes in the compost bin, and we can at least pat ourselves on the back that it’s not adding to a landfill.

But let’s be honest – most of the food that goes to waste goes in the trash. There’s all that stuff that we don’t put in our compost bins, the well-intentioned leftovers dragged home from a too-large meal out, the chicken carcass from a roast chicken, or the deli meat that never made it into a sandwich. There’s the yogurt that doesn’t pass the sniff test in the morning and the mayonnaise that says it’s past its use-by date and we’re simply not sure if it’s still good.

So, what would it take to make us more aware of the food we throw out each week? How about separating all “organic” matter from other trash? On a recent trip to Florence, Italy, a group of us rented a small apartment for the week. It was fun to visit the markets, shop with the locals, and fix our own breakfast with that amazing yogurt that even now seems to appear only in Europe. Each morning, we would brew pots of strong coffee, clean in-season Italian strawberries, cook brown eggs, or eat granola with that yogurt. A couple of nights, we made dinner in the apartment as well.

We were about two days into the trip when my sister realized we were supposed to be separating our trash. I mean really separating our trash. There was to be one bag for plastics, one for multi-material (paper, metal, Styrofoam, etc.), one for non-recyclables, and finally, one for organics, which included not only plant products but meats and all other foods. In squares around the city, convenient to everything, were clusters of four bins, one for each type of waste. We did the best we could, short of having a haz-mat suit, to retro-sort our waste!

It became a game, and I could see how living there, I would become much more conscious of what got tossed each week. If it all goes in one heap, it’s out of sight, out of mind.

Some cities here require organics to be recycled – San Francisco, Seattle, New York City. It seems to me that the mere act of separating would make one more aware of what is wasted, and it would spur us as a nation to waste less. That’s a win-win-win for everyone: saving money, keeping food from landfills, and reducing food waste in the first place!