Just take it one starfish at a time …

Is feeding one person important? Will it even make a difference?

You’ve probably heard one of St. Teresa’s most famous quotes: “If you can’t feed 100, then feed just one.” 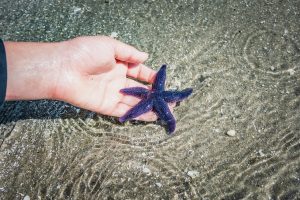 This quote always reminds me of the tale of a man walking down the beach after a storm. There are hundreds and hundreds of starfish lying on the beach. The man carefully places starfish after starfish back into the sea.

Another man approaches and says, “What are you doing? You’ll never save all these starfish.” as he points to the hundreds left still on the beach. “Yes,” replies the rescuer, “but I can help this one.” He smiles and returns another to the vast ocean.

I suppose there are many who would look at a beach full of starfish and just sigh, overwhelmed, turning away. They are human and easily overwhelmed by all the suffering. They have challenges of their own and when they look out into the world, it seems unlikely they could make a dent.

But occasionally, someone comes along. They also sigh at the hurt and suffering in front of them. But, rather than turn away, they take a step closer and start by gently picking up just one starfish at a time.

It’s quite similar with hunger, isn’t it? There are so many suffering. We see children in refugee camps, elderly in our own city, students at our local school. It’s overwhelming to say the least. How can we help so many? So often, we push the thought aside because it is just too big.

I was much the same years ago. I am a sensitive soul and I kicked myself for not doing more. I would wallow, wishing I had become a nurse or gone to school to lead a nonprofit. I felt like I’d missed an opportunity to do something big – and the funny thing was – I missed many opportunities right in front of me to do something small.

Not anymore. I made a conscious choice to do something. I can’t run the organization, but I can show up once a month and lend a hand. I can’t save every refugee, but I can make an occasional and heartfelt donation. I still ache to think of my own neighbors in need, but I say a prayer as I prepare a bag of groceries for the food bank.

So, what if those little things ARE the big things? Think of the power of 100 moms’ bags of groceries. Think of a million people each donating $5.

And most importantly, don’t think of thousands of people who are dealing with hunger and food insecurity.

Think of looking into the face of just one child in need and remember that you can make a difference in their day, in their life, right now.

This holiday season, in light of the year 2020 has been, it might be even more tempting to give in, to feel overwhelmed and throw up your hands. So for now, just take it one starfish at a time.

* Molly Veydovec is a SoSA Volunteer