Mike Smith and the Grow More, Give More Program

by Rose Kennedy in her “Dirt to Fork” blog, carried in the Knoxville Mercury website. Used with permission. *

They call it gleaning. And while it has nothing to do with aliens or polished gems or anything like that, it’s almost as cool: to gather grain or other material that is left after the main crop has been gathered. 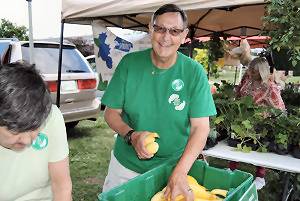 Gleaning as carried out by the Grow More, Give More program co-heralded by the University of Tennessee’s Farmer’s Market and the local chapter of the nonprofit Society of St. Andrew involves a charitable redistribution of your produce wealth. You bring the extra produce that grows in your garden to the market on Wednesday evenings from 4 to 7 p.m. The Knoxville Gleaning Coordinator for SoSA, Mike Smith, meets you there, tallies the poundage, and makes sure a food pantry or other local charity gets it to redistribute to working poor or down-on-their luck cooks, or to use to fix meals for the needy.

You can get more or less expansive—planting extra just for this purpose, for example, or just buying a little extra from the market vendors to donate.

Smith, who volunteers his time and is part of the larger national group that has projects in eight states, welcomes it all with a cheerful grin. He looks like a stern accountant in quiet moments, but when someone approaches the booth bearing, say, a basket of gleaming green zucchini, he is suddenly recognizable as the man who signs e-mails with “THANKS for being YOU!!”

His smile is only part of the reason all my fretting is over almost as soon as it starts. He also answers each bit of skepticism I put forth with a no-nonsense explanation, based on his seven years with SoSA and three years with UT’s GMGM:

What if you’re like me and never experience that plague of extra zucchini or cucumbers, instead having extras of, say, non-bulbing fennel or mint. You wouldn’t want that, would you?

Yes, they would. “We take any fresh produce anyway you give it to us. We, SoSA, will take anything edible and find it a home for someone or some group in need. We took a big bag of thyme the other night and the ladies at Samaritan Place were so excited about having that to use for the next day’s meals.” 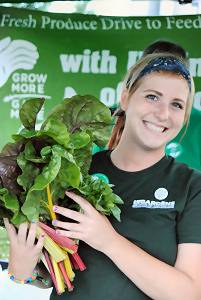 Wouldn’t most hungry people have trouble being able to fix the food for themselves, lacking kitchens and so forth? “When we have crop drops we typically have six to 12 individuals come by and pick up portions. We give to places like Knox Area Rescue Ministries, Love Kitchen, and FISH, that have volunteers who can fix the vegetables. But mainly we give to church pantries that give the produce out to the families right when they get back to their church.” Those recipients freely select say, the broccoli rabe or the Swiss chard that was donated the first GMGM night of 2015, June 5.

The part where some of the stuff goes to the zoo, that’s just a nice story?

No. “I do work with the zoo, particularly when we have a 40,000-pound truck load of something, because it will usually contain produce that is just overly ripe—the almost rotten or squashed ends up with them.”

And you tell me that the animals there will eat it?

Sure. “Elephants, gorillas and pigs all like the sweet potatoes when we get them. The zoo has said that if a human eats some kind of food; they will have an animal there that will also like that kind of food.”

What if everyone has a surplus of the same thing at the same time? Tomatoes, if my garden is any indication, are going to slather the landscape with their fruit this year, for example.

Bring it on. “We did over 10,000 pounds with UT Farmers Market last year, including gleaning from various farmers and the UT Organic Farm. We did more than 8,800 pounds from Edible Arrangements—fresh fruit that they couldn’t use and my church, Concord United Methodist, participated by gleaning roughly 60,000 pounds of Irish potatoes, sweet potatoes, and green beans.”

Uh oh, there’s that church word. Many a do-gooder vegetable gardener flounders when faith is a condition of participation. So, do you have to be churchy to participate?

But if you want to approach it from a faith-based perspective, that’s okay? 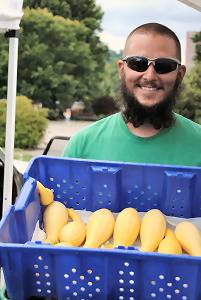 “For me, it’s both faith and personality. I was brought up in a Christian home and we didn’t waste and we tried to help others in need. My faith from that nurturing has continued to help we find ways to try to help folks less fortunate than I am. I am blessed to be able to my little part and I give God all the glory.”

If you’re going to grow extra for GMGM, should it be high in nutrition, like kale, or something that will keep a long time, like winter squash?

Whatever you want to grow, “we’ll take it.”

But not buggy produce, surely?

This gets me to thinking about my kale, which us Southerners would say was “all ate up” by cabbage flies or some other villain. Some nice person or market vendor has donated a raft (that’s maybe not the technical term) of gorgeous, tender, Red Russian kale that’s just like mine should be, but isn’t.

If some food pantry patron ended up with that, what could they make with it? I wonder out loud.

Lucky for me, the next booth over at this Wednesday market is Jeff Martin, extension assistant for the UT Farmer’s Market and a dab hand with recipes for the produce he provides to his CSA customers, and the excess he donates to GMGM. 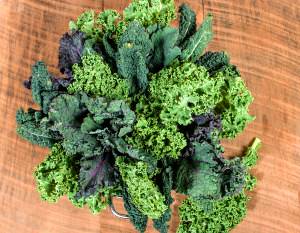 1 bunch Red Russian kale, chopped, or use any other variety of kale

1 tsp. tamari or other soy sauce

1 C grated cheese (I used a blend of low-fat cheese called Pizza Cheese which has mozzarella, provolone, Romano, and Parmesan)

2. Cut off kale stems and discard, wash kale leaves and dry well. (I use a salad spinner.)

3. Pile kale leaves up on top of each other and cut into strips about 3/4-inch wide, then turn cutting board the other way and cut again so you have squares just under an inch square. Chop onion into pieces about 1/2 inch.

4. Heat olive oil in large heavy frying pan, add onions and sauté 3 minutes. Add garlic and sauté about 2 more minutes, then add kale, turning over as it wilts and sautéeing about 5 minutes, or until kale is significantly wilted and softened.

7. Bake 20-25 minutes until eggs are well set and the top is lightly browned. Serve hot. This is good with low-fat sour cream or salsa

* Rose Kennedy went to Knoxville to work as an editorial assistant on 13-30’s Retail Appliance Management Series and never saw a reason to leave. Her “so uncool I’m cool” career among the alt weekly newspaper crowd has led to award-winning articles on Dr. Bill Bass and the Body Farm and cyber-bullying at West High School, and treasonous food columns about preferring unsweet tea and feeling ambivalent about biscuits.

Each year, the food we waste costs the North ...

Volunteers needed for the Indy Winters Market! Saturdays - for only 1 hour! Sign up today: #endhunger ... See More of This PostSee Less of This Post

Gleaning in Indiana Beginning in January 2018...

Did you know the USDA has a National Hunger Hotline? This helps connect people to food and resources. Just dial 1-866-3-HUNGRY (or 1-877-8-HAMBRE for Spanish) to speak with a person. You can also text 97779 a question with keywords, such as "food" or "meals," and receive an automated response to locate resources near your address or zip code. #themoreweknow #endhunger ... See More of This PostSee Less of This Post

Did you know the USDA has a National Hunger Hotline? This helps connect people to food and resources. Just dial 1-866-3-HUNGRY (or 1-877-8-HAMBRE for Spanish) to speak with a person. You can also text 97779 a question with keywords, such as "food" or "meals," and receive an automated response to locate resources near your address or zip code. #themoreweknow #endhunger ... See More of This PostSee Less of This Post