The best kept secret of the United Methodist Church”— that’s how Mike Smith describes The Society of St. Andrew. A former president of the Holston Conference of United Methodist Men, Smith recalls his first encounter with SoSA at a 2008 national conference in Nashville. “I had never heard of SoSA”, he says, “but Wade (Wade Mays, national Meals for Millions coordinator) was there showing the SoSA video of sweet potatoes being dumped into the landfill.” 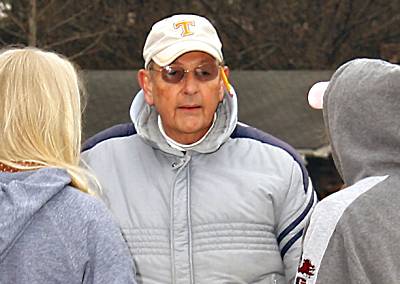 Mike Smith (center) first heard about SoSA at a conference in Nashville in 2008. He’s been an inspirational volunteer and leader in gleaning ever since.

After finding out more about SoSA’s work, Smith says it made powerful sense: “I think about all that God provides. We waste so much.” Since discovering SoSA, Mike has been an enthusiastic advocate in Tennessee. Between organizing crop drops at his home congregation, Concord UMC, and gleaning markets in the greater Knoxville area, he has helped save, well, tons of food.

In 2010, he helped organize his first crop drop of what he thought would be potatoes, but the produce changed several times until finally a truck filled with watermelons arrived. As he’s been known to say, “Sometimes you just have to roll with it.” Since that first drop, Mike has organized a total of seven crop drops in the Knoxville area, working with everything from sweet potatoes to yogurt.

One of the top-ranked agricultural programs in the U.S, the University of Tennessee operates student farms as classrooms for future farmers to explore new techniques and technologies. Mike and volunteers from the
Knoxville area have gleaned the UT farms for two years and recovered a variety of fresh produce to take to several area agencies around the Knoxville area.

“Knoxville is the 26th hungriest metro area in the country,” he notes, “and that means there is a lot left to do.” Mike says,” This isn’t hard work. I always get so much more than I give.” Mike should know; he is humble and always appreciates the opportunity to serve. You don’t find a volunteer like him every day.

Note: United Methodist Men has officially worked with Society of St. Andrew since 1998. This initiative, called Hunger Relief Advocates, is designed to help the United Methodist Church engage in ministry to and with the poor and hungry, under leadership of United Methodist Men. The Meals for Millions giving program provides the funding for this program. LEARN MORE