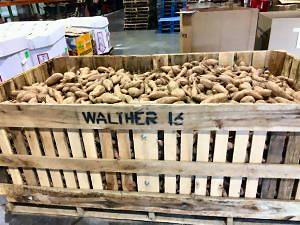 In the gleaning world, once November comes, the produce supply can become pretty thin. This year was particularly rough in the Charlotte area where I work. A hot and exceptionally dry summer meant we missed a lot of the corn we typically harvest. The crops were simply too sparse for the farmers to have spares. The heat lasted into the fall and destroyed our most dependable late crops: turnips and greens. Even tomato harvests were smaller. We still had lots of zucchini and yellow squash until Hurricane Matthew brought much needed rain, but so much in some areas that entire crops were washed out of the ground. And there went the summer squash.

So it was with a happy heart that I answered the phone in early November to hear Troy Edwards on the other end of the line. He works for Walther Farms, a large potato farmer and distributor. Each year, Walther Farms asks employees to name a ministry in their community to receive several thousand pounds of potatoes at Thanksgiving and Christmas. Troy found Society of St. Andrew last year and we gratefully distributed 5,000 pounds of lovely spuds at each of the holidays.

This year, we got a bonus to our bonus! Troy said this time we’d also receive 2,000 pounds of sweet potatoes, a healthy favorite at Thanksgiving. The only catch: the sweet potatoes weren’t bagged. But we’d never let a little thing like that deter us. 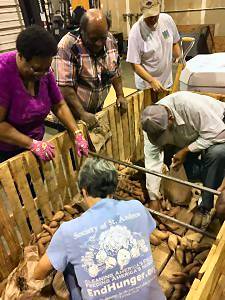 Our partner agency, Loaves and Fishes, generously allowed all the potatoes to be offloaded into their warehouse. That afternoon, a half dozen of us descended on the biggest bin of sweet potatoes I’ve ever seen. It was made of wood slats, probably ten feet long and four or five feet wide, and deep enough I had to crawl inside to get the last of the spuds out of the red sandy soil in the bottom.

We loaded trucks with a mix of white and sweet potatoes and off they went to five counties: to food pantries, soup kitchens, refugee communities, and low-income neighborhoods – just in time for Thanksgiving.

After a hard year, it was a generous gift from a company that could have sold all those perfectly good potatoes themselves. Perhaps, to their bottom line, our shipment was small potatoes, but to us, and to the folks we serve, it meant a happier, healthier, more traditional Thanksgiving. And there’s nothing small about that.