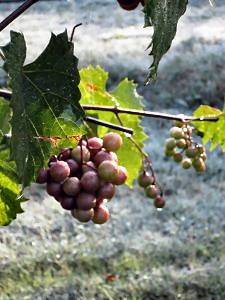 I got a call this week from one of the farmers we work with. He has a lovely farm west of Charlotte, North Carolina where he and his wife raise blackberries and blueberries in the summer, and then harvest acres and acres of muscadine and Concord grapes in the fall. They usually have us out to glean at least once a season, and we all enjoy walking through the well-tended rows to snip off gorgeous bunches of grapes, filling boxes and baskets and pretending for one morning that we’re in Tuscany instead of North Carolina.

This time, he wasn’t ready to have us in his fields. They are still harvesting, still selling. But he had an entire pallet – about 1,000 pounds – of golden muscadines that he wasn’t going to be able to sell. They had been picked, washed, sorted, and boxed in clamshells to ship to a large grocery chain. But because the grocer didn’t want them right away, they had already sat in his cooler for a week. Each clamshell is stamped with a pack date, and the farmer knew that now the grocer would reject them, this time because they had sat too long.

Those of us who love muscadines (and being from northern Minnesota, I came late to the taste but crave them each fall) know that they will keep for a long time. That half-ton of lovely grapes have a lot of life left in them.

The farmer needed the cooler space for produce he can sell, so he called me. He wasn’t “sour grapes” about his unsold grapes. His loss was someone else’s gain, and he was happy to have someone less fortunate enjoy them.

It took me one phone call and a mere five minutes to find a ministry thrilled to make the half hour drive to his farm to have a pallet of grapes loaded on their truck. We work often with this group; they serve lots of young families and senior citizens in a low-income area in Rock Hill, SC. The people they serve are always asking for fresh fruits and vegetables, and while I’m happy to supply what I can, I only wish it were more.

While I hate that our farmers can’t sell everything they raise, I’m eternally grateful that so many of them take the time to pick up the phone and call me. I cannot help them recoup the cost of the harvest, the washing, the sorting, and the packing. But I can let them know that hundreds of folks had good food because of their generosity. It doesn’t fill their bank accounts, unfortunately, but each truckload fills hearts and stomachs!