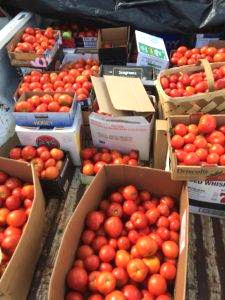 “No throwing!” That’s one of our main rules as we glean the fields in Charlotte, North Carolina. “If you throw, you have to leave the field.” I tell everyone this – children and adults alike – before we head out to glean.

People think it’s strict, and I have often been accused of being no fun at all. I’ve raised a child. I’m used to the accusation and can live with it.

We put that rule in place for several reasons. One, we’re there to glean God’s (and the farmer’s) bounty and we need to show respect for the produce and for the farmer’s offering to us. Two, it’s a safety issue. A cob of corn or a big sweet potato lobbed at someone not paying attention could do some real harm. And of course, three, once someone chucks a big, ripe juicy tomato at a friend a couple rows over, and that friend tosses one back, we’re going to find ourselves in the middle of a full-blown food fight. Tomatoes, especially those that are half rotten, seem to prove the greatest temptation.

I thought of that the other day when I stumbled on a statistic from the Environmental Protection Agency. According to the EPA, 31% of tomatoes purchased by U.S. households are thrown away (not necessarily at someone, of course!), which equals more than 20 tomatoes per household per year. That means we’re throwing away $2.3 million worth of tomatoes alone! Seriously?

Extrapolated, those numbers show household food waste in the U.S. equals $166 billion a year. All those wasted tomatoes and other food account for 25% of our fresh water use (ask drought-stricken regions of the American Southwest and Midwest if fresh water conservation is important), consumes enough energy to power the country for a week, and utilizes enough land to feed the world’s hungry. And that’s just what we waste!

To put it another away, the average household throws out about $2,200 worth of food each year, or more than $40 a week! (It’s interesting to note that a single person with no income would receive SNAP benefits equal to about $48 per week, or the amount most households toss out.)

Why do we throw away so much food? Maybe it just doesn’t seem valuable to us. According the United States Department of Agriculture, food spending as a percentage of our income has declined from 17.5% in 1960 to 9.9% in 2013. What we toss doesn’t affect our bottom line the way it used to. We don’t value it.

Maybe we need to make a “No Throwing” rule for America, not just at gleanings! Before that food goes into the landfill, try to figure out what else you can do with it. Those tomatoes might have a bad spot or two, but would still make great sauce. Wilted celery and sprouting potatoes are just fine in soup. Soft bananas? Make a smoothie or pan of banana bread. I’ll curry just about anything, or make it into chili. Because throwing, when it comes to food, is wrong. Even if that means I’m no fun at all!