Not Just a Drop in the Bucket 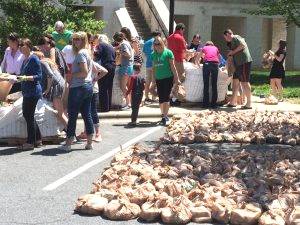 Anyone who has ever had a leaky roof knows that it takes a lot of drops to fill a bucket. At first, so little happens that it feels like all noise and no substance. But eventually, with enough rain, that bucket will be filled to overflowing. Sometimes we diminish things by saying, “Oh, that’s just a drop in the bucket!”

But drops can be spectacular! In my role as the Society of St. Andrew coordinator for the Charlotte area, I’ve overseen a few potato drops. Those are big, big drops! For the uninitiated, a potato drop involves a large parking lot, a tractor-trailer loaded with 40,000 pounds of either sweet potatoes or white potatoes in 2,000-pound pallets, and lots and lots of volunteers. Those volunteers sort and package and distribute all those potatoes, often in a single afternoon. 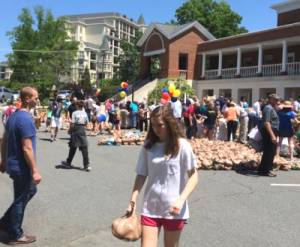 Recently, a church in Charlotte, North Carolina hosted a potato drop following its Sunday worship service. They had a perfect day for it – sunny and in the 70s, with a little bit of a breeze. It was fun to see their eyes as the parishioners left their fellowship lunch and came face-to-face with the reality of more than twenty bins of potatoes, nearly as tall as many of them.

A potato drop is impressive. One potato at a time, one bag at a time, the potatoes get bagged. As they were sorted, we lined them up in ten rows of ten bags, with about ten pounds of potatoes per bag, so each parking space held about a half ton of spuds! People laughed and talked. A truck pulled in, was filled, and a cheer went up. A car pulled in, was crammed with so many potatoes that the back sagged, and a cheer went up.  More cheers rose as each of the 2,000-pound bins was emptied.

Sometimes, doing this job, I can become discouraged. No matter how much food I get out into my community, there will still be hungry people. I feed a group one week, but what about the next? That’s what I ask myself every day. But a day like Sunday, in the sunny church parking lot, reminds me that every drop in every bucket makes a difference in someone’s life. And that’s never too small of an offering to make!