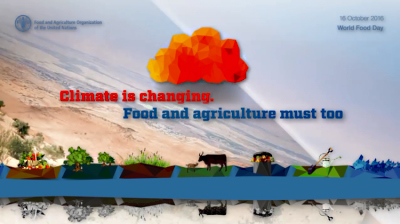 World Food Day, celebrated this Sunday, October 16, isn’t some foodie event about finding the most obscure cheese or the darkest chocolate. It’s not recognizing that there isn’t enough food in the world. It’s about acknowledging that there is plenty of food in the world, but that not everyone has equal access to that food. It’s about good food that’s wasted instead of eaten. It’s about making sure that everyone who is hungry gets fed. So it’s a great day for those of us at Society of St. Andrew!

According to the United Nations web site: On 16 October 1945, 42 countries assembled in Quebec, Canada, to create the Food and Agriculture Organization of the United Nations (FAO). Their goal was to free humanity from hunger and malnutrition, and to effectively manage the global food system…

FAO celebrates World Food Day each year on 16 October to commemorate the founding of the organization in 1945. Events are organized in over 150 countries across the world, making it one of the most celebrated days of the UN calendar. These events promote worldwide awareness and action for those who suffer from hunger and for the need to ensure food security and nutritious diets for all.

It’s heartbreaking that more than 70 years later, there is still great hunger disparity in our world. World Food Day is an opportunity to pause and think about our own food usage. For example, the U.S. diet is heavily reliant on meat and dairy, both of which are inefficient in delivering nutrition to populations based on resources used to produce them. Much of the world relies on rice, beans, and other grains and legumes to provide the bulk of their sustenance.

Americans waste 40% of the food produced; it doesn’t have to be that way. We can be more conscious of what we buy and how we prepare it. We can lobby Congress to pass laws making it easier and more efficient for farmers, grocers, and distributors to donate food. Many European Union nations have passed legislation making it illegal to for grocers and distributors to throw out food that others could eat. Think of the savings here if we could take that step.

In the meantime, on Sunday, prepare a Simple Supper of rice and beans. Share it with friends and neighbors. Then take the money that you would have spent going out, or on buying more expensive meats and dairy products, and donate that to a cause working to fight hunger, such as Society of St. Andrew.

To get you started, here’s a vegetarian Cuban Black Bean dish I made for company the other night. We licked the bowl clean!

In a large saute pan over medium heat, saute the bell pepper and onion in olive oil until it starts to soften. Add the cumin and stir it around with the vegetables for a minute until it starts to smell good. Then add the oregano and garlic and stir. Add the black beans and mix together. Then add the orange juice and bring to a simmer. Simmer on low for about half an hour, covered, to get everything nice and soft. If it needs more liquid, add either water or more juice. Serve over white rice, with a salad, and fried plantains. Makes 4 servings.