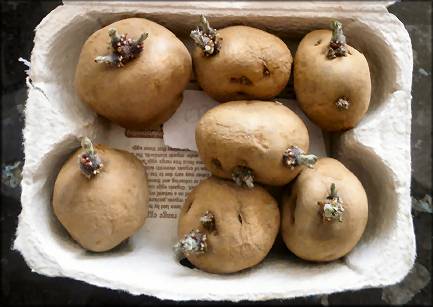 Each spring, SoSA delivers several truck-loads of certified White Superior U.S. Seed Potatoes, mostly to impoverished regions of the Appalachian Mountains. These hearty seed potatoes were grown in Maine and are suitable for planting in a variety of locations and growing seasons.

The shipments are usually received by churches or church agencies with a distribution system already in place. They divide the potatoes among Appalachian families that have some land to plant on, but who are without the resources to purchase seeds. The families then plant, tend, and harvest the new potato crop. Recipients grow their own nutritious food to supplement their diets, and often provide food to friends and neighbors. At times, several families share a community garden, planting and caring for the crop together.

SoSA’s North Carolina Regional Director, Michael Binger, reports on the distribution of a recent load of seed potatoes in Western North Carolina. About 12-thousand pounds of potatoes arrived at the Haywood County Schools Nutrition Office, which then distributed them.

Some recipients had a few pounds to plant and to share the crop with family and neighbors. Some potatoes were planted in larger fields by the Haywood Gleaners organization, which will later harvest the crop to bring to food pantries across the region. About 800 pounds of seed potatoes were planted by Madison County jail inmates, who will harvest them for people in need in Haywood and Madison counties.

Some potatoes went to the “Come to the Table” conference in Sylva, N.C. where the faith community meets with farmers, gardeners, farm workers, educators, health professionals, and community organizations. Receiving groups distributed the potatoes to local organizations that grow crops for the needy in their communities.

Other seed potatoes have been delivered this year to Jackson Area Ministries in Ohio, Cedar Ridge Ministries in Kentucky, and to agencies in Knoxville, Tenn. and agencies near Bland, Bristol, and Richlands, Va.

At times, some of the seed potatoes arrive in Native American towns or reservations to be used by individual families, or to be coordinated by the tribal government. Among the recipients are the Lumbee Tribe in Lumberton, N.C. and the Cherokee Tribe in Cherokee, N.C.

In all, SoSA will deliver about 350,000 pounds of seed potatoes to needy regions in 2015. Once harvested, this will yield nearly three-million pounds of fresh, nutritious potatoes that families can store and use as needed throughout the fall and winter.