She Could’ve Been My Grandmother 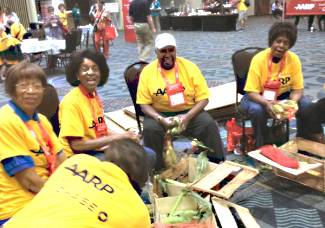 Senior volunteers bag corn at the AARP convention in Miami. Earlier this month, Society of St. Andrew was invited to host a multiple-day Produce Drop at the National AARP Convention in Miami, Florida. On Thursday morning, we unloaded 40,000 pounds of sweet corn. By noon, 300 convention volunteers had bagged it, and it was on its way to the Feeding South Florida food bank.

The next day, 40,000 pounds of red and green sweet peppers arrived, as did the volunteers who eagerly helped bag them for distribution.

One of the highlights of events such as this is the conversation that takes place around the bins of food. It is a great way to tell folks about the work of SoSA and learn how and why they volunteer in their community.

At this event, I met a lot of nice folks and heard lots of stories, but Maggie’s is one that will forever resonate in my mind. Maggie looked like anyone’s sweet grandmother. She was neatly dressed, an educated person, and highly intelligent.

Maggie joined our group of pepper baggers, and I soon noticed she handled each one with care, and occasionally lifted it to her nose to enjoy its sweet aroma. She finally asked, “How does one go about getting produce such as this?” Was she asking because her church had a food pantry that she would like to see receive some of this type of food? Did she live in an area that doesn’t get much produce?

Maggie went on to explain she is 82-years-old and receives $1,000 per month from Social Security. She pays $800 rent for a one-bedroom apartment, and after her bills are paid she has exactly $100 left for food each month. She happily shared that her food stamps recently went up from $16 to $36 per month, giving her a total of $136 per month for food.

Maggie has learned how to stretch one whole chicken to last an entire month, and found some great recipes for casseroles that can be divided and apportioned out for each meal. She has learned to have a late breakfast and late lunch, so she can eat just two meals a day. She found a food pantry in her neighborhood which has helped, but she has diabetes and they give her mostly processed food. She has gained 15 pounds and her doctor wants her to lose weight and to eat healthier.

Her daughter helped with a little extra each month, but she recently lost her job, so now Maggie has to make do on the $136. “If I had peppers like this every day,” she excitedly explained, “I could do so much!”

Choking back tears, I asked Maggie if she would like to take some peppers with her when she left. After all, (thinking to myself) it is for people like Maggie that SoSA exists.

With a genuine heartfelt thank you, she picked up two peppers and said they would do just fine. I explained that she could have as many bags of peppers as would fit in her walker basket, and tears sprung to her eyes. She carefully placed three bags of peppers into the basket and explained she would use one pepper that night and freeze the rest for later. She called her daughter to tell her, as if we had gifted her with something much more valuable than bags of sweet peppers.

Sitting with us at the table, as Maggie shared her story, was another volunteer whose church has a food pantry near Maggie’s neighborhood. This food pantry gets fresh produce from the food bank that receives fresh produce from SoSA. So when Maggie left, she not only took peppers with her, she also had the name and address of the food pantry so she could have good food as long as she needs it.

As Maggie finished her shift and walked away, I glanced around the room that had become silent. Eyes glistened with moisture as others like me tried to hold back tears. She could very easily have been my grandmother, and she was hungry.

I often tell folks that we don’t know who is hungry; it could be the person standing behind us in line, the child sitting next to your child in school, or the grandmother volunteering to bag food for the hungry … someone like Maggie.

* Barbara Sayles is SoSA’s Regional Director for Florida and Georgia