Willie Nelson, Neil Young, John Mellencamp, and Dave Matthews occupy the front row on the stage for a news conference at Farm Aid 2016. Society of St. Andrew hosted a tent in the Farm Aid village for the second time, explaining our feeding ministry to farmers and others who gathered for the concert. 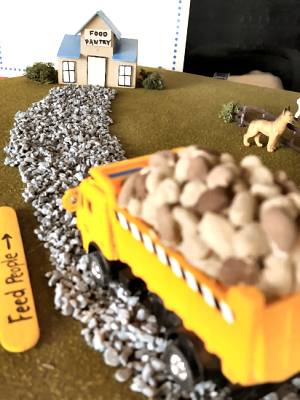 A close-up of the demonstration board — headed to the food pantry!

“There’s a revolution starting! It’s called eating good food that your neighbors made for you … Let the earth bring us all together back to the roots. Eat good food.” These words came from Neil Young on the stage at Farm Aid 2016, held in Bristow, Virginia in September. Young has been with several musical groups, including Crosby, Stills, Nash, and Young. He joined with Willie Nelson and John Mellencamp back in 1985 to create the first of what is now an annual concert to support family farmers in America.

This year, the Society of St. Andrew was invited to be part of the “village” on the concert grounds. SoSA set up in a tent where it presented our gleaning solution to hunger in America. In addition to feeding millions of people, SoSA gleaning reduces food waste and reduces the production of dangerous greenhouse gases. 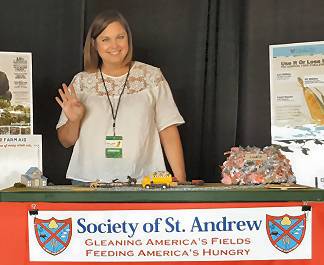 Jenny Trevey at the SoSA booth

Jenny Trevey, our public relations associate, created a demonstration board where visitors spun an arrow that sent them on their way down one of four paths. On the 2×4 foot board, the user would then drive the little truckload of potatoes to a food pantry to feed people, to a farm to feed the animals, back to the field to be buried in the ground, or to a landfill to become nothing but gas-producing garbage.

Jenny and SoSA staffers Renee Scott and Stella Carson ran the booth in the tent all day, speaking with hundreds of farmers and other concert-goers who came by to learn more about gleaning and the work of the Society of St. Andrew. That evening, the 2016 concert featured Willie Nelson, John Mellencamp, Neil Young, Dave Matthews, and many other musical groups, entertaining the huge crowd, and reminding them that we depend on America’s farmers to feed us all. America’s farmers also work with SoSA to feed the hungry across the nation. We appreciate them and their generosity every day.