Each Wednesday, rain or shine, blazing 90-degree heat or freezing February cold, a truck with a Society of St. Andrew volunteer behind the wheel makes a 60-mile round trip from a distribution center in Monroe, NC to Refugee Support Service in East Charlotte. Those dedicated drivers do it because they know that no matter what the weather, approximately 60 families will be there for ESL classes, help with medical appointments and insurance forms, and classes on American culture. And they’ll also line up to help unload the truck filled with up to 2,000 pounds of donated produce.

It’s a successful partnership that has worked for more than five years, since March 2010. The refugee populations have changed and grown over the years – now, along with Montagnards from the central Vietnamese Highlands, the center also sees Bhutanese-Nepalis, many of whom are Hindu and persecuted by the Buddhist Bhutanese government, Burmese who have escaped their nation’s military regime and spent time in Thai refugee camps, and a few Africans and Afghans. 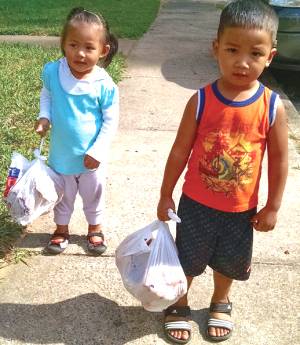 Refugee children carrying some of the food from SoSA

Working with a distributor for a local grocery chain, Society of St. Andrew picks up a load of produce each week. Some is graded out because of size or shape. Some is rejected simply because a supplier sent more than the store wanted. All of it is good to eat.

Our vegetables aren’t always an easy fit for the diverse refugee communities, but they are game to try anything. Marci Mroz, the RSS volunteer who oversees the weekly food distribution, says it’s fun to see the folks, some in the country only a couple weeks, try to figure out what they’re getting. Marci researches unfamiliar produce (What to do with chayote? What about rhubarb?) and passes that along to clients. Marci gets a kick out of their openness to new things. “Often they will just take a big old bite out of something to figure out what it is and if it should be eaten raw or if it needs to be cooked.”

The partnership depends on the generosity of our distributor and on the dedication of our SoSA truck drivers. Four drivers take primary responsibility for the distribution, one for each Wednesday of the month. They seldom miss a day, scheduling doctor appointments and even vacations around “their week” when they pick up hundreds of pounds of bok choi, persimmons, chayote, yucca, radishes, and whatever else our wonderful distributor can share. Occasionally they’ll get the all-time favorite donation: ginger! 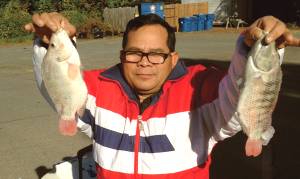 The joy of receiving fresh fish.

In October, a tilapia farm in West Charlotte donated a ton of live tilapia to SoSA. Rachel Humphries, Director of Refugee Support Services, loaded her truck with coolers on Tuesday night, drove to the “farm” on Wednesday morning, and surprised the refugees with about 500 pounds of still flopping fish!

We all look forward to what food adventures the next five years bring!