Stealing from the Table of the Poor and Hungry

There’s a great internet meme that shows up in my Facebook feed pretty often. It’s the wonderful Pope Francis saying, “You pray for the hungry. Then you feed them. That is how prayer works.” I love the quote and every time it pops up, it makes me smile. It reminds me of James 2:26: “For just as the body without the spirit is dead, so faith without works is also dead.”

The only problem with this quote? I don’t think the Pope ever actually said those precise words. Sure, it sounds like something the Pope would say, and it’s in the spirit of things that he has said many times. He obviously cares deeply for the poor and the disenfranchised and believes action is called for. But I cannot find any speech or paper that actually contains these words.

While attempting to find the origins of this particular quote, I found another that I like at least as much. It’s from an audience Pope Francis gave in June 2013, as the United Nations began its push to help slow and reverse food waste in a hungry world. “Our grandparents,” he said, “used to make a point of not throwing away leftover food. Consumerism has made us accustomed to wasting food daily and we are unable to see its real value.” Then he told the weekly audience gathered in St. Peter’s Square, “Throwing away food is like stealing from the table of those who are poor and hungry.”

Working for Society of St. Andrew, I’m well aware of the crazy culture of food waste here in the United States, where more produce is never picked or is thrown away than is actually eaten. Forty percent of all food in the U.S. is wasted at some point in the production chain. And worldwide statistics are nearly as bad.

Taken together, these two ideas are the sum of my working life. It’s wrong to waste food when people are hungry, and it does no good to say we care about the hungry if we’re not willing to feed them. 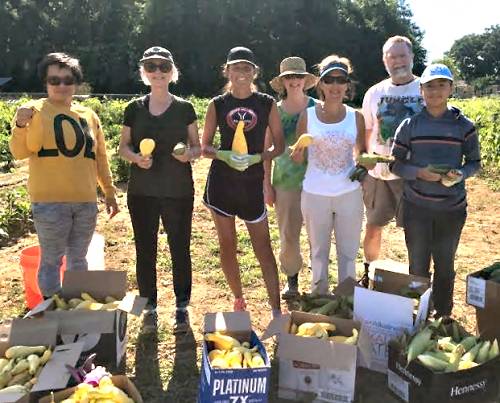 Is it always easy? Of course not. Last week, a farmer told me I could bring a few folks out to clean out some rows of corn, cucumbers, and yellow squash. He needed to bush-hog it by the end of the week to plant more crops, to keep a steady supply for market. But he was willing to wait for us and to take time to show us where to glean when he could have been out working instead. On a hot Thursday morning, nine of us arrived at the field. Those gleaners could have slept in. They could have gone to the gym or gone shopping. Instead, we sorted through vines and stalks and gathered a few hundred pounds of produce that went to three ministries in two counties.

Actions matter, and they speak a lot louder than words. It does no good to say we care about the hungry and yet do nothing to feed them. If we waste food, or continue supporting systems that encourage food waste, we harm not only the environment but also our neighbors who need that food. Join us in a field. Volunteer to deliver food from a farm or distribution center to an agency that can get it to those in need. Ask your local grocery store to give their rejected but edible produce to those who need it, rather than tossing it into a dumpster. Watch your own consumption habits – and become part of the solution, not the problem. That is how prayer works.