At the grocery store yesterday, I heard a very frustrated woman approach an employee and say, “Don’t you have any strawberries?” Her cart already held plump red peppers and robotic tomatoes. This was the first week of February in Charlotte, North Carolina. I’m hoping for my first juicy strawberry in April, and will probably wait until June or July for tomatoes and peppers. But the stocker told her, “Oh, yes. We have plenty,” and pointed her to a display of strawberries. 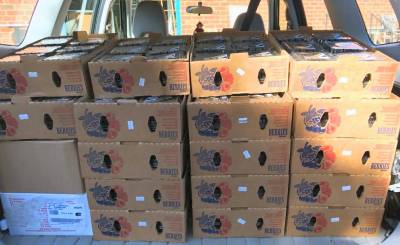 An article in The Atlantic, Why the Americans Lead the World in Food Waste, points out that Americans waste more produce than any other country, and part of the reason is our assumption that perfect produce will be available all year long. Those strawberries and peppers and tomatoes traveled a long way to reach my local grocer, and our expectation that they look perfect upon arrival causes them to be discarded in huge amounts along the way. (I don’t even like to think about how I look after traveling across the country!)

A few weeks ago, a distributor called to say he had, among other things, cases and cases of blackberries rejected by a local grocery chain. A few of the clamshells – there were twelve in each case – had a moldy berry in the mix. But the grocer didn’t want to risk having their customers find anything less than ideal on their shelves. So the whole shipment went back to the local distribution point. I shuddered to think of the carbon footprint of those out-of-season fruit as they made their way across the country in a refrigerated truck, only to be rejected at the end of their journey.

We managed to get more than thirty cases of the blackberries in the back of my trusty Subaru Forester, along with a few other odds and ends the distributor had sitting around, and I brought all of it to one of our partner agencies, Friendship Trays. 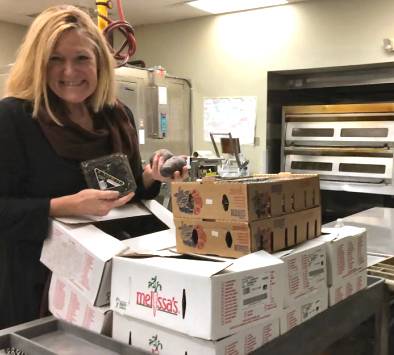 Friendship Trays is our local meals-on-wheels agency, delivering about 750 meals a day to the area’s elderly, shut-ins, and others in need. They have a creative and vibrant kitchen that makes use of produce year-round as they work to bring fresh, nutritious meals to those they serve. They were happy to receive the blackberries the grocer did not want, and I pictured blackberry cobbler appearing on trays later in the week. In the last five years, other nations have made strides in slowing food waste. France has banned supermarkets from throwing away food, and the French grocery chain Intermarche has a successful program to sell, at a discount, the “ugly” produce that consumers might balk at. Germany is revamping its system of expiration dates which too often causes people to throw out perfectly good food.

While we Americans have a long way to go, there is hope. In 2015, the Obama administration set a goal to reduce food waste in America by 50% by 2030. A public-private partnership involves non-profits, faith-based organizations, governmental agencies (federal, state, and local) and the private sector in an attempt to educate consumers, rescue good food, and get it to those who need it.

In the meantime, if you find yourself with a case of blackberries and find one or two bad ones, don’t throw them out. Here’s a great recipe for blackberry sauce that will brighten your morning cereal or your ice cream for dessert!

It will keep for at least a week, if you can stop yourself from eating it all at once.