The Adventures of Logan

(You can be a superhero, too.) 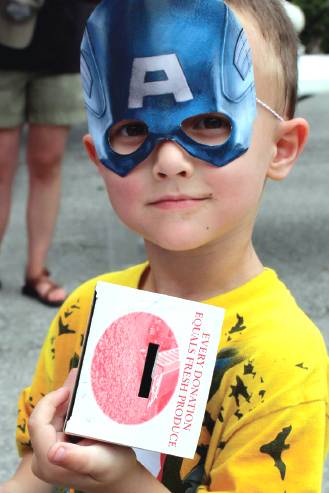 This past March, a 5-year-old boy showed up at the apple drop being held in the parking lot of Asbury United Methodist Church in Madison, Ala. He wore no mask, but was still recognizable as Logan Todd, the little superhero who appeared in SoSA publications back in 2013.

Two years ago, Logan’s photo (the little superhero) caught our attention as he picked up his Society of St. Andrew collection box. The church had just held a very large Vacation Bible School, topped off with a 60,000 pound crop drop of squash and sweet potatoes.

There were 900 children there that day, helping to bag up all that produce for area food pantries to distribute. Logan arrived to be part of that day, and he wanted to bring home a box to collect money to help SoSA feed hungry people. 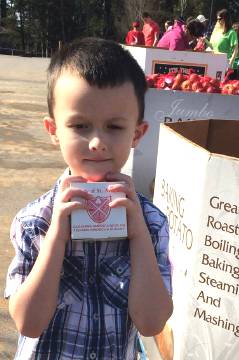 That was two years ago. Since then, the family has been through some tough times of their own. Logan’s mother, Faye Todd, was diagnosed with brain cancer. She is enduring some very difficult medical treatments, but the tumor is currently in a stable condition. Logan’s grandparents, Ron and Kathy Burdett, have been very helpful in taking care of Logan in the times when that has been so crucial.

Throughout this time, Logan has been busy riding his bike and go-kart, and watching Nick Jr. and the Disney Channel. Along the way, he sometimes has some change that he can put in either his own piggy bank or in the Society of St. Andrew collection box. He usually chose the collection box.

This year, the bank appeared full, and his mother counted the change. It had reached $100. When she told Logan, he said, “That would buy a lot of Pokemon cards!” His mother told him that would also provide enough servings of food to feed 5,000 people. Logan said he wanted to bring the box back to Mary Lynn Botts, the SoSA coordinator in Alabama, to feed the people.

On March 7, Logan and his family arrived at the apple drop being held back at the parking lot of Asbury United Methodist Church. He brought his collection box full of change to feed hungry people. And he picked up a new box.