The Blessings of Controlled Panic 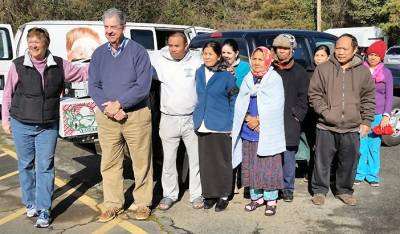 Part of my job (honestly, a lot of my job) involves controlled panic. I get a call that a farmer has 10,000 pounds of watermelons that need to be out of his cooler in two days, and I panic a bit, then get busy on the phones, and a miracle happens. It always does. Every time.

My panic increased over the past couple months. For more than four years, the same crew of four drivers has each taken one Wednesday a month to make the 60-mile round trip to a distribution warehouse to pick up a load of produce to bring to our partner agency, Refugee Support Services. Very seldom have I ever had to find a substitute for anyone on this crew. Occasionally they’d swap weeks if vacations or doctor’s appointments interfered. I’ve worked with them through chemo treatments, loss of parents, and other things that life throws at us.

Then in February, Carl Leonard, my third-Wednesday driver, told me it would be his last month as our driver. His grandson was going off to school and needed his truck. Okay, I panicked. Carl had been an unfailingly cheerful presence from the day I took the job. I scrolled through my contacts. I had a driver to local pantries who had worked with us a good bit over the last couple years. He knew the distributor. I took a chance and sent an email telling him about the ministry, the distance, and the routine. I told him he could tell me “no,” and he was free to tell me “no” and it wouldn’t hurt my feelings. He wrote back almost immediately, “I can do this.” And I breathed a sigh of relief.

But I relaxed too soon. Carolyn Pais, our fourth-Wednesday driver, called to tell me she and her husband were moving to the beach, fulfilling a longtime dream. I will miss her friendly phone calls and positive attitude. And her amazing dependability. More panic. Sure, I could find one new driver willing to go 60 miles once a month. But two? Within two months?

I thought on it. Lost a little sleep. Then one of my long-time local drivers called to tell me he was thinking of “retiring.”  We talked. I’ve loved working with him and we’ve shared good times and bad over the years. In conversation, I asked if he had ever been to Refugee Support Services in all his years with us and he said he hadn’t. I told him I was looking for a monthly Wednesday driver, and he said, “Oh, I can do that!” A friend can help with the driving, and the regular route will allow them to plan for the shared trip.

So we bid a fond farewell to Carl Leonard and we welcome George White, who drove his first route this week! We wish traveling mercies for Carolyn Pais, and we welcome Asa Myers and his friend Vernon Rogers.

Who knows what calls people to certain ministries? I just know I’m grateful to the people who feel called to Society of St. Andrew! Who say, “Yes, I can do that!” when I ask them crazy things in my moments of panic. And because they know the value of bringing fresh, nutritious produce to a community that desperately needs not only the food, but also the knowledge that after traveling halfway around the world, their new community loves them.