The greatest of these is charity 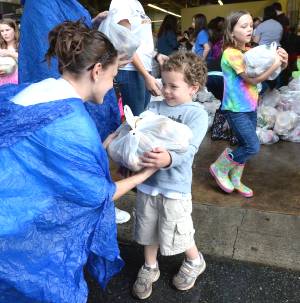 For some reason, the question stumped me: “So, what you do is charity?” I had a table at an elementary school’s Earth Day celebration, and a little boy asked me that after I explained how Society of St. Andrew works. It’s odd, but no one has ever asked me that before. I know we’re a non-profit; I know we have the highest rating possible from Charity Navigator. We bring food to people who otherwise wouldn’t have access to it. And yet, I stumbled over saying that we’re a charity.

Words have so many meanings and connotations. For some, charity is a handout, helping people game the system, institutionalizing dependence. This group believes that charity makes the situation worse. Some say the market will take care of poverty if we just let the market work. Yet we all now people who have full-time jobs and cannot afford rent, decent food, and transportation all in the same month. We live in a political climate where we too often see people demonizing the poor and the marginalized.

Still others say charity is all right as far as it goes, but we should really work for justice, to change the system that, in our case, created the hunger to begin with. Charity makes us feel better about the situation while doing nothing to stop the forces perpetuating it.

And yet, Society of St. Andrew is a charity in the best sense of the word. The King James Bible translates the familiar passage from 1 Corinthians 13, as “faith, hope and charity, these three, but the greatest of these is charity.” St. Augustine wrote, “Charity is a virtue which, when our affections are perfectly ordered, unites us to God, for by it we love him.” And Thomas Aquinas believed that of all Christian virtues, charity was “the foundation or root” of them all.

If charity asks us to be the hands and feet of God, then our hands pick the food and our feet carry that food deep into neighborhoods to people who might not have access to fresh corn in the summer or apples or greens in the fall. Our faith and hope sustain us as we do our work, knowing that while we bring food to many, even more go without.