The Inside Matters Most 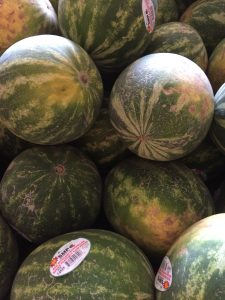 I have a small scar on my neck where a very talented surgeon did a biopsy more than twenty years ago. She told me, drawing a line with a pen, “I’m going to cut right here because as you age, that line will just become a wrinkle anyway and the scar will be invisible.” That wasn’t a lot of comfort. Not only was I worried about my health (the lymph node was benign, thankfully,) but I also had to worry about a scar. And a wrinkly neck!

Over the years, I’ve learned to accept and embrace the various scars I’ve acquired, as well as my gray hair and wrinkles, as proof that, while I’ve lived through a lot, I’ve gotten, hopefully, better with age.

I’ve been thinking about scars this past week. I got a call about 4,800 pounds of watermelons that had been rejected by a local grocery store. The reason? They had some scarring on their rinds. Apparently, when they were young and tender (like I had been!), a windstorm passed by. The vines brushing against the fruit makes tiny cuts on them. The fruit heals and grows just fine, but they don’t look perfect.

Do you know how easy it is to find new homes for 4,800 pounds of watermelon during one of the first warm spells in May? Ridiculously easy, is the answer. Within fifteen minutes, I had six drivers lined up to get a load over the following two days.

According the Watermelon Nutrition Board, watermelons are full of great nutrients. A cup of watermelon contains 21% of our recommended intake of Vitamin C, 18% of our Vitamin A, and lots and lots of the antioxidant Lycopene, which has many health benefits. Plus, it’s just really delicious.

I took a load to Friendship Trays, our meals on wheels agency, and as we unloaded them from my car, volunteers waited inside to wash them and chop them to go out on trays the next day, and for many days to come. A couple bins went to a local soup kitchen. One bin went to a low-income neighborhood without a grocery store. 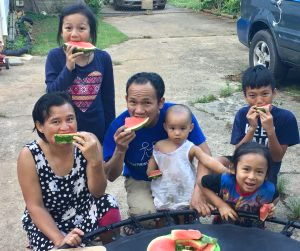 And one bin went to our regular delivery site, Refugee Support Services. Our newest neighbors get a lot of crazy produce from us – literally tons of chayote and parsley root and other things that most of us would scratch our heads over. And they’re great sports about figuring out what to do with it and how to make it work in their diets. But how wonderful for them to get a bin of easily understood and delicious to eat watermelon! It was, literally, fun for the whole family.

Scars on the outside don’t tell us about how good something is. We move a lot of food at Society of St. Andrew, food that grocers and packing houses deem unworthy because of scarring, size, shape, or other minor issues, but which brings better health to our community, one load at a time. It’s what’s inside that matters.