The Luxury of Fresh Produce

I’m a sucker for certain types of Internet “click bait,” those headlines written solely to drive traffic to a page. I skip most (not all) videos of funny cats, but if I see a headline that says, “The 10 Things You Should Always Buy at Trader Joe’s,” I’m there! And of course the other day I clicked on, “The Items You Should Never Buy at Costco.”

There is a Costco near my house and I’m typically there once a week. While there are lots of things I don’t buy there (diamond jewelry, pot stickers, cases of soda), I can still load up a cart for just the two of us. But I was stunned when one of the first things listed as a “never buy” was produce. It wasn’t that the produce is poor quality, but that most of us would never go through it quickly enough to avoid wasting it. That’s not usually a problem at our house, where the two of us go through lots of Costco produce each week, especially this time of year when local produce offerings are slim. At one time, we’ll buy three pounds of bananas, six avocados, and a 20-pound box of oranges. It’s not cheap (although usually less expensive than the grocery up the street), but I feel like we are healthier and feel better if we eat our fruits and vegetables.

Not everyone has the luxury to buy those luscious fresh fruits and vegetables. While Americans typically spend a smaller share of income on food than we would have even 30 years ago, for people in the lower income brackets, those numbers tell a different story.

Check out this graph from the United States Department of Agriculture. Americans with the smallest income spend nearly 40 percent of their income on food, which is still less than $4,000. Meanwhile, top earners spend only 8 percent of their income on food, equal to a whopping $11,000. Keep in mind that those poorer households also spend more than the recommended 30 percent on housing, which doesn’t leave much left over for other necessities such as transportation, clothing, or healthcare. 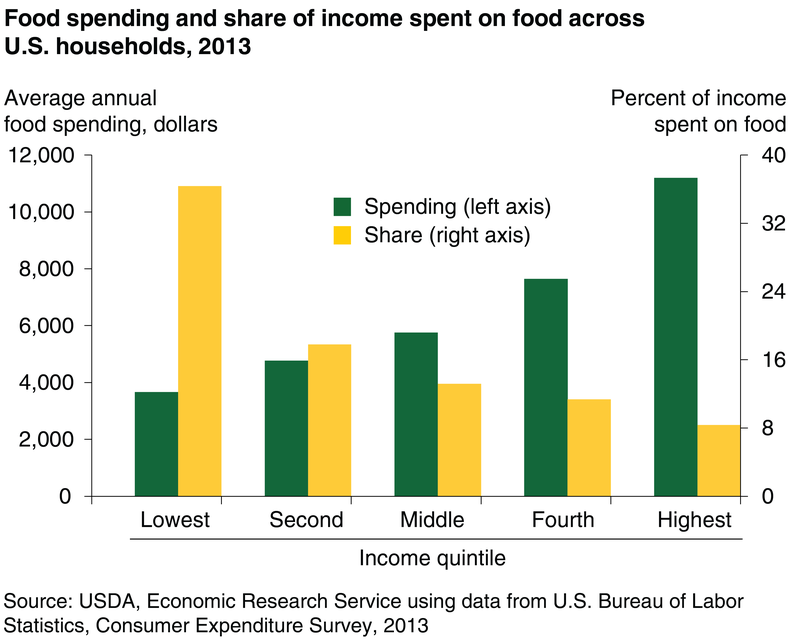 If I had $72 dollars a week (that’s $3,767 divided by 52) to spend on food, I doubt I’d be buying cases of oranges or a half dozen avocados, if I even had access to them (and also the disposable income to purchase a Costco membership.) Lower income families tend to buy a lot more inexpensive foods (boxed pasta dinners, canned soups, sweetened cereals, and white breads) that will fill people up, rather than necessarily keep them healthy. It’s also what’s available in their neighborhood convenience stores and dollar stores, where many are forced to shop. (In case you’re wondering, they also spend a much lower percentage of their food dollars eating out than do those with higher incomes, according to data from the Bureau of Labor Statistics, so they’re not going to McDonald’s for every meal.)

There are lots of pieces in play here. More affordable housing would allow lower income Americans to spend a bit more on good food. As would higher wages for the jobs they do for us: nurses’ aides, daycare workers, house cleaners, restaurant workers.

We at Society of St. Andrew work hard to get good, fresh produce to those in need of it. We do it efficiently, using as few resources as possible. But it’s never enough. Too much still goes to waste, and too many people still lack access to the foods they need to lead healthier better lives. Each year we rescue more food and help more people, and we’ll keep at it until we reach the point where no food goes to waste and none of our neighbors go hungry.