Positive reports have been released lately indicating that while food insecurity in the United States remains higher than it was before the Great Recession began in 2008, it has declined slowly but steadily since 2011. Along with this bit of good news, there is troubling note: The number of food insecure seniors is not only higher than the average for other groups, it has not declined.

According to the U.S. Census, the numbers of seniors facing food insecurity began climbing in 2001, and while those numbers have plateaued, they have not declined the way numbers for other groups have. Shockingly, the number of seniors facing “very low food security” has more than doubled over the past 14 years.

No one knows the reason, but experts speculate on why this number rose so quickly and has remained this high. It could be that seniors haven’t been able to recover the wealth lost in the 2008 recession the way younger Americans did. Interest rates remain low, which means for those depending on savings, they get little income. Rents have increased more quickly than inflation in many areas.

And government support of agencies feeding seniors has declined. According to a story in the Washington Post, the number of meals served by the Meals on Wheels network has dropped by 23 million a year since 2005. Rising fuel and food costs haven’t been met with an increase in assistance from the federal government. “One in four of our programs have a waiting list with an average of 200 individuals,” Erika Kelly (government affairs officer at Meals on Wheels) said. 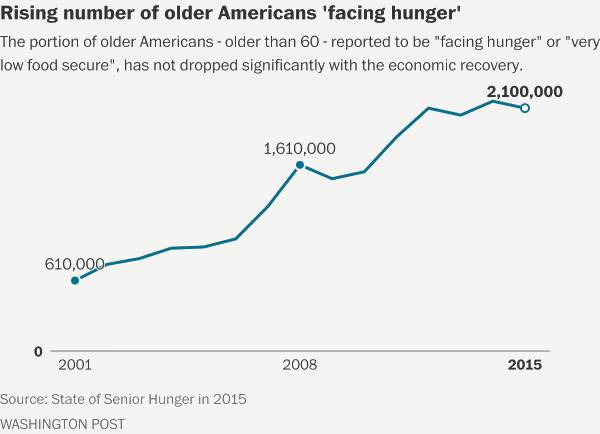 This chart is from the Washington Post article linked above.

A couple of years ago, Becky, a social worker affiliated with two low-income senior apartment communities, called me hoping to find a way to get more fresh food to the elderly she serves. Their limited incomes and limited mobility precluded them from purchasing much fresh produce at stores. Poor health made it difficult for them to wait in lines at food pantries, which typically have little fresh food to distribute anyway.

I connected Becky to a small Saturday farmers market and she has built fantastic relationships there. Since May of this year alone, she has been able to gather more than 1,200 pounds of food, ranging from escarole to roman cauliflower to zucchini to potatoes. I love the image of these sweet folks figuring out what to do with tatsoi or Shishito peppers! The farmers love not worrying about what to do with their leftover food at the end of market. And Becky loves knowing the people she serves are getting good, fresh food.

It’s important to hold onto the good news. Food insecurity is declining. And through Society of St. Andrew, we are able to bring good nutritious produce to many seniors in our communities. But the needs are far too great to become complacent, and the population far too vulnerable to forget. There is always more to do.