When it comes to food, my family has always used the sniff test: Pull something out of the refrigerator, open the lid and give it a sniff. If it smells bad, it probably is bad. But if yogurt smells like yogurt or milk smells like milk, we considered it safe.

I thought of that the other day when a friend told me she’d cleaned her refrigerator while her husband was away. When he came home, he began rummaging through the shelves looking for his opened bottle of salad dressing to have with dinner; she owned up to throwing it out because it had expired in January and this was early June. By her standards, it was too old to keep. By his standards, it had tasted fine last week so it was most likely good this week. Who is right? 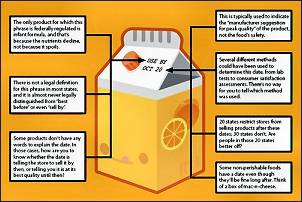 According to Emily Broad Leib, Director of the Harvard Food Law and Policy Clinic, the average household throws out $1,560 worth of food each year, which is approximately 10 per cent of the average food budget. Much of that food gets tossed because of confusion over “sell by,” “best by,” and “use by” dates, which are not regulated by any clear standards (baby food is the one exception.) Food processors have a vested interest in setting shorter dates and encouraging us to throw out food and to buy more.

In the case of my friends, it means the husband was most likely correct. Food that continues to look and smell good is almost always good to eat. “Best by” doesn’t mean that it is unsafe, only that some minor deterioration of quality may have taken place.   It means my mother was right to raise a family of “sniff testers.”

What can be done to slow the rising tide of food waste in the U.S.? Leib offers these suggestions:

In a country where food insecurity is on the rise and the environmental cost of food waste in landfills is only now beginning to be widely understood, it makes sense to use the food that’s good to eat. Now that’s a strategy that passes the sniff test!