Volunteers Collect Leftover Apples from Morris Orchard for Those in Need

Instead of allowing produce to go to waste, one area orchard is donating its leftover fruit to the needy.

Volunteers, coordinated by the Big Island-based Society of St. Andrew, have collected leftover apples from Morris Orchard in Monroe over the last few weeks.

The Society of St. Andrew salvages and distributes about 30 million pounds of food a year to feeding agencies nationwide. 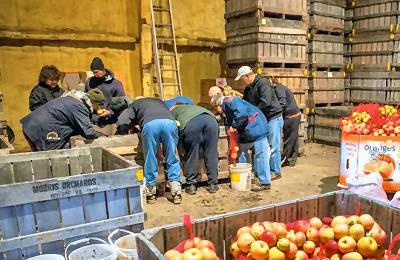 Morris Orchard donates to the Society because of its system of distributing food to those who need it, said co-owner Judy Barnes.

“The main thing is for the fruit to go to people who otherwise wouldn’t have any,” Barnes said.

Located in Monroe, the orchard sells several varieties of fruit including apples, peaches and berries as well as cider and some vegetables. Its apple season ends when the orchard runs out of fruit, usually in the middle of January, Barnes said.

The Society of St. Andrew primarily recovers produce that farmers “do not have a market to sell” such as ugly or misshapen food, said Marian Kelly, the society’s co-founder.

“The produce may not be up to Walmart standards or Food Lion standards or grocery store standards but they’re still quite edible and nutritious,” Kelly said.

Locally, agencies that benefit from the Society may include the Blue Ridge Area Food Bank, The Salvation Army or church pantries.

Under regional gleaning coordinator Sarah Ramey, volunteers have bagged apples that currently are sitting in cold storage at Morris Orchard. Volunteers past and present have included local churches and area chapters of the Girl Scouts and Boy Scouts, Barnes said.

“Again, this is produce that could not be sold for [whatever] reason, but I tell you, if you saw those apples that he’s given us at Morris Orchard, they’re fantastic,” Kelly said. “You wouldn’t be able to tell the difference from what you pick up at Food Lion.”