What Do They Eat on Tuesday? 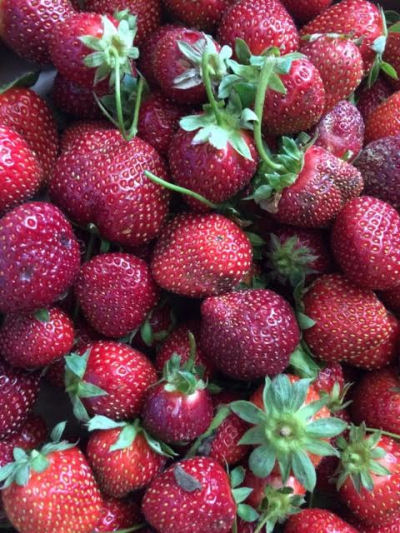 “What do they eat on Tuesday?” Those words have been rolling around in my head since we harvested our final field of beautiful strawberries last summer.

Sarah had brought her young son Graham to glean with us that day for the first time. Graham is one of those amazing kids I love to be around: He’s a questioner. Why was there a chicken coop with no chickens? Why were some berries bigger than others? Did every flower make a berry? Would all the green berries turn red?

Then he asked his mom where the food was going. She explained that it went to places that fed people who didn’t have enough to eat. “Like the soup kitchen up the street from our church. Every Monday they feed people who are hungry.” Graham thought for a minute, and then asked, “What do they eat on Tuesday?”

Wow. Let that question sink in.

In the United States, since the 1980s, we provide less support in way of food stamps (which allows people to shop for what they need close to their homes) and have become increasingly reliant on a system of food banks, food pantries, and soup kitchens. According to a blog post on “A Place at the Table,” in 1980, the United States had 21 food banks. Today there are more than 200 food banks, and more than 60,000 food pantries and shelters. A feeding industry has sprung up to replace the losses faced by families whose Food Stamps/SNAP benefits were cut, or who face stagnant wages but continually rising housing prices in markets all over the country.

While it’s great that these sites have stepped in to feed our hungry neighbors, it doesn’t address the underlying problem of why we have so many hungry people in a country that is, by most standards, extremely prosperous.

And it doesn’t make life particularly easy (or healthy) for folks who have to cobble together enough food every month to feed their families. Loaves and Fishes, an incredible agency with whom we work here in Charlotte, North Carolina, allows clients to come eight times in 365 days. That meets an immediate need and is vitally important. But what do they eat the ninth week, if they need it?

A while back, a social worker called to see if she could get some produce for the senior housing sites she covered. She had been told that those seniors, many with mobility issues, needed to visit food pantries if they needed more food. “How,” she asked, “are they supposed to get there? How can they stand in line not knowing if there is anything for them at the end, especially anything healthy?”

At a soup kitchen we work with, the manager told me that often she sees seniors wrapping up half a biscuit or a piece of sandwich on a Friday afternoon. “They get pretty hungry over the weekend,” she said, and she often tries to find a few things to send home to tide them over to Monday.

What do they eat on Tuesday? What do they eat in January, when our holiday spirit has dissipated? What do the children who get free breakfast and lunch eat in the summer when school is out? Or on a snow day or a weekend? Is it all right that in the United States, in 2019, that we still ask those questions?