Zucchini: Deserving of a Little Respect! 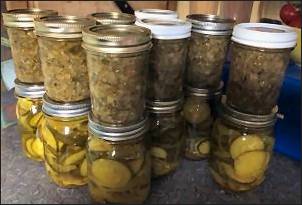 This freshly-made stash of pickles and chow chow will extend the harvest well into the winter.

Zucchini … the Rodney Dangerfield of the vegetable world (although it is technically a fruit,) it gets no respect. There’s even a “National Sneak Some Zucchini Onto Your Neighbor’s Porch Day,” when it’s fair game to give away the prolific produce without permission. (Mark your calendars for August 8, and feel free to leave some for me!)

I’m going on record as one of the people who loves zucchini. It’s a chameleon in the kitchen, a vegetable that can do it all. And as a gleaning coordinator, I love it because even in a tough year like this one, where rain seldom falls and the thermometer hovers north of 90 degrees almost every day in North Carolina, the farmers still call me to send trucks to pick up zucchini. In June alone, just in the Charlotte area, we moved more than 14,000 pounds of zucchini and yellow squash to at least seven counties.

Those kinds of numbers amaze people. I’ve been doing this job for four years now and they still amaze me! All that lovely produce, and it would be in a big old compost pile or the landfill if not for our generous farmers who hold it for us until I can get drivers out, and our drivers who travel sometimes an hour or more to bring it back to the ministries they serve. I love the image of all those pickup trucks, zipping across a map of the Charlotte metro region, with huge bins of zucchini in the back, waiting to be bagged and distributed to folks who will do all kinds of wonderful things with it.

I was lucky enough a couple weeks ago to receive what I call a Zucchini Windfall! Not 1,000-pound bin by any means, which is what gets fork-lifted onto my drivers’ trucks, but, for me, a joyful and abundant treat! I pulled out my mother’s old canning cookbooks, did some tapping around on the Internet, and got busy. 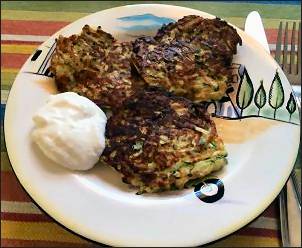 I made a double batch of zucchini bread and butter pickles, which will bring any sandwich to life. Ten pints are canned and waiting to provide sunshine in the winter. I also made eight half-pints of zucchini chow chow. And a zucchini cake (recipe here). And a spiralized zucchini salad. And grilled zucchini. And zucchini fritters. And zucchini pad Thai.

It brings me great joy each time I hear back from one of my drivers. One, who took 1,000 pounds to a pair of ministries in Rowan County, called and said, “They cleaned out the truck and asked when I could bring more!” Another driver delivered to a low-income apartment community in Charlotte, where people from all over the world live. He said when the word went out that he had a truckload of zucchini, folks came pouring out of the buildings with grocery bags, just to get a few pounds! We’ve sent it soup kitchens, food pantries, and refugee ministries.

I don’t know if they’re doing as many crazy things with zucchini as I did, but I know it’s eaten and greatly appreciated.  In a world where there is so much hunger, it’s always a miracle that we can fill each other with caring, and also with, yes, zucchini.